As some of you know, I'm a fairly longtime Lost Genre Guild member. (LGG on FB) A couple of LGG members happened to mention Tolkien on the mailing list recently and their comments reminded me of my introduction to Tolkien's The Hobbit, The Lord of the Rings, and the Tolkien Reader in the mid-60's. Here's what I remember.

The Hobbit & The Lord of the Rings gained sudden popularity in the mid-sixties and a classmate--hearing I hadn't read them yet--insisted that I get on them at once. I found a copy of The Hobbit (Houghton Mifflin, first edition, 1937) at the Newark Free Library. This was the pre-LotR edition, in which Smeagol/Gollum gives Bilbo the One Ring as a birthday present. Perhaps a year later, I owned a Ballantine paperback copy of The Hobbit which had the new version of Bilbo's encounter with a more murderous Gollum.

The first time I had a chance, I tried to convince the Newark Free Library staff that their 1937 copy must be fairly rare & should be taken out of the open stacks. They weren't having any. After all I was just a college sophomore. Not surprisingly, the 1937 disappeared. And, no, I didn't disappear it.

(Cool library by the way. It was housed in a small "decommissioned" church with a proper old-fashioned steeple & a tiny cemetery behind it. Inside, it was easy to see where the altar, choir loft and pews had been. Each was now connected to the others via short flights of steps.)

But back to my freshman year. I finished The Hobbit and wanted more. No internet much less Amazon back then, however the "Books in Print" books indicated that Tolkien had written a trilogy called The Lord of the Rings. I checked the university bookstore & the one in town. Nothing. One day while I was browsing the paperback section in a drugstore, I noticed a garishly colored paperback that I think was The Two Towers. Over the next few weeks, I haunted every druggist in the area. I found "The Fellowship of the Ring" and "The Return of the King" both, but they were not from the same store. 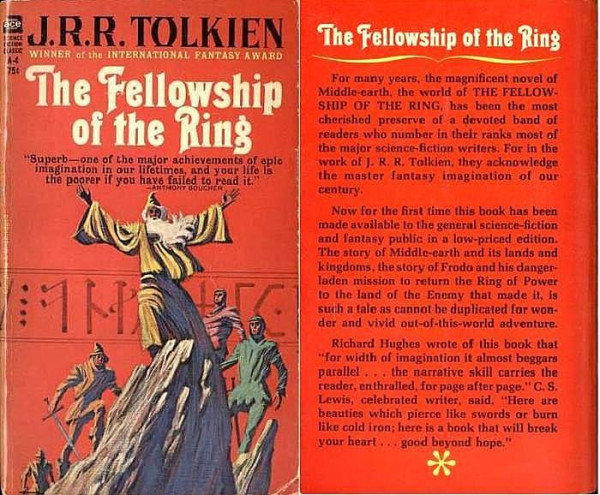 Got'em! Started reading. Was initially disappointed when the focus was Bilbo's nephew Frodo rather than Bilbo. But there was Gandalf! I read. I loved. And for about the next fiften years I reread all of the books annually. 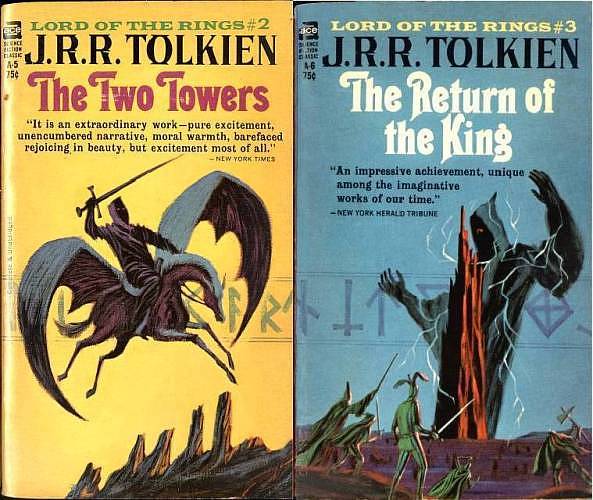 Of course these were the Ace "Science Fiction Classic" editions, mostly referred to as Ace's "pirated" LotR. Well... Actually... Ace didn't -quite- pirate Tolkien's master piece. They just found themselves a little loophole carelessly left unguarded by George Allen/George Allen Unwin (UK) and Houghton Mifflin (US). It's a good thing that the LotR heroes were more alert.

Let's get back to how the loophole became a loophole, or even further back to Tolkien himself. While the professor was writing his saga and afterwards, he saw the tale not as a trilogy, nor even as one book, but rather as six books. He even assigned them  titles: The Ring Sets Out, The Ring Goes South, The Treason at Isengard, The Ring Goes East, The War of the Ring, The End of the Third Age. (If you flip through the pages of any of the familiar three books, you'll see the telltale break in each one.)

As I understand it, Tolkien wanted the UK press to bind & sell LotR as six volumes in hardcover. Their counter-offer was a hard-bound trilogy, with each volume to go on the market separately over the better part of a year. One single volume encompassing the entire tale was impossible at the time, because of a paper shortage. Hence, the small pause in publication between the three volumes.

For some reason that I've never understood, given the paper shortage, the UK press printed all the pages of each volume and sent tons of them to Houghton Mifflin in the US, where they were bound. Why didn't Allen Unwin send copies of the plates instead? It would have saved them a ton of paper. I haven't a clue. Maybe the paper shortage was even worse in the US?
(BTW, if anyone knows more about this, please comment below)

Well, copyright law can be and usually is, complex, hard to parse and--oh yeah--strange. Because the US books were actually printed in the UK and only bound in the US, Ace interpreted that no one had printed Tolkien's books in the US. This meant--to Ace at least--that the US copyright for The Lord of the Rings had lapsed, and they hastily produced their own paperback copies in late 1964. On really cheap paper. I suppose because there was plenty of that?

Tolkien threw a major fit and for good reason. Litigation all around. Ace ceased and desisted (with first some jiggery-pokery behind closed doors). Copyrights were renewed. Houghton Mifflin picked up where they left off and Ballantine took up the task of publishing the "authorized" paperback version of LotR. Each 1965 edition Ballantine volume contains a message from Tolkien,
"This paperback edition, and no other, has been published with my consent and co-operation. Those who approve of courtesy (at least) to living authors will purchase it, and no other." 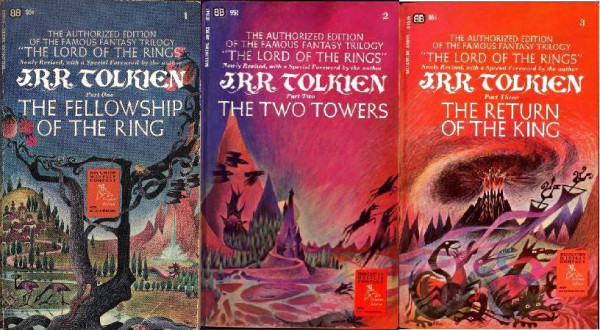 Barbara Remington's triptych painting above was divided into thirds for the covers. BTW, the ACE covers (way above) were done by Jack Gaughan 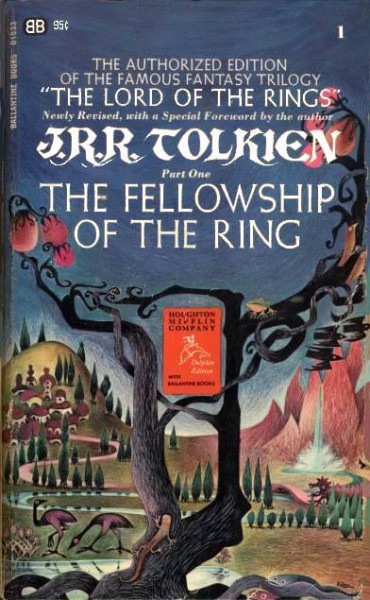 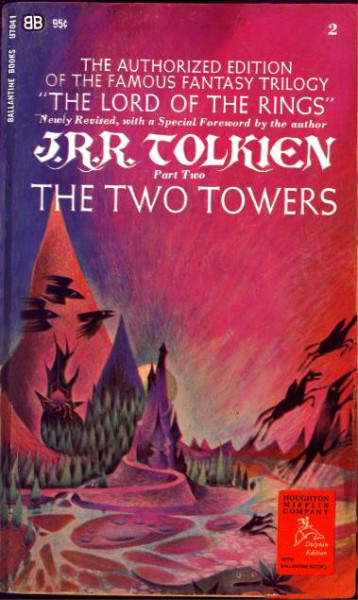 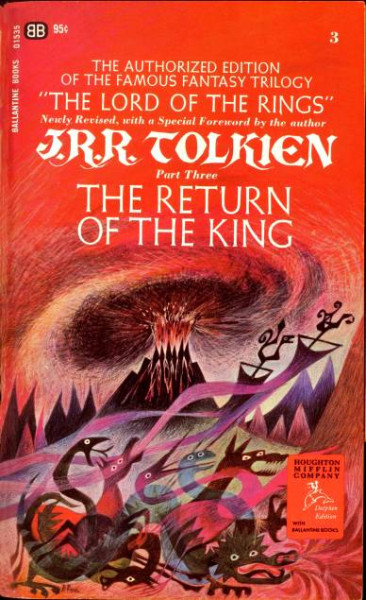 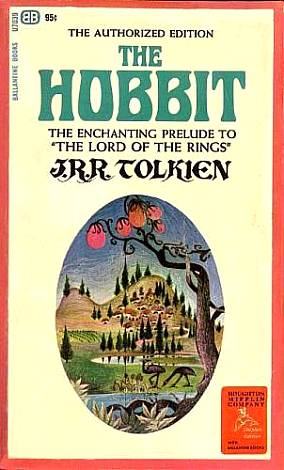 If the artwork looks vaguely familiar, look back at Remington's "The Fellowship of the Ring."
The same year that Ballantine produced "The Hobbit", they also offered "The Tolkien Reader", containing The Homecoming of Beorhtnoth Beorhthelm's Son, On Fairy-Stories, Leaf by Niggle, Farmer Giles of Ham, and The Adventures of Tom Bombadil.
This is a jewel of a book, first because of the Pauline Baynes covers & artwork... 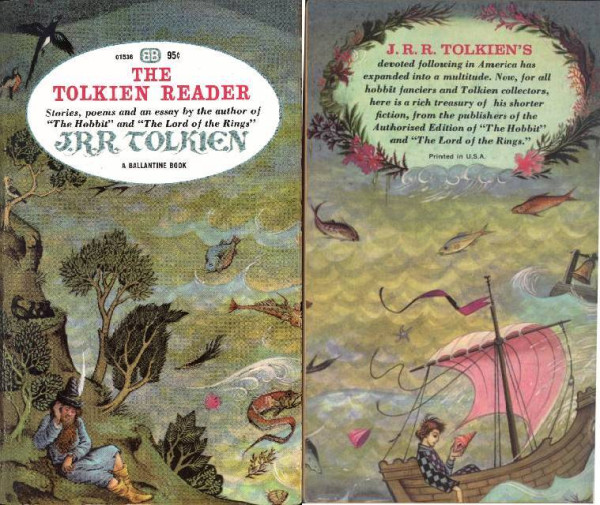 And second because it contains "Leaf by Niggle", my favorite Tolkien tale.

Most readers--including myself-- agree with Tolkien that The Hobbit, The Lord of the Rings, and so on are not allegories. Tolkien disliked allegory. Some LotR readers say they see spiritual and or symbolic aspects in LotR. That is something I never picked up on-- except perhaps when Frodo is trapped in the Nazgul fortress Minas Morgul, and Samwise sings about the stars to lift his spirits, "...above all shadows rides the Sun and Stars for ever dwell; I will not say the day is done. nor bid the Stars farewell!" Only to have Frodo answer him! Way cool!

Tolkien made an exception about allegory when he wrote "Leaf by Niggle". Perhaps because it was partially autobiographical? Perhaps because he originally wrote it for himself, in a moment of strong spiritual self-perception? Well, I don't know, but that's what I see when I read the story.

I wrote about "Leaf by Niggle" here at "Scribblings" back in 2008. Here's a bit of what I said then,
"Tolkien noted elsewhere that we are all subcreators, that it is a natural role for us. In this very special short story, Tolkien was writing about himself as a subcreator during a particularly clear moment of spiritual discernment. I don't want to give away the plot but suffice it to say that the main character, Niggle, is working on a huge painting of an immense tree, filled with details that grow in complexity the more he paints. He would love to finish the painting but he fears that he won't, partly because of a neighbor who interrupts him repeatedly with some very real if pragmatic needs....I hope that "Leaf by Niggle" is all true for Tolkien's sake--and for ours. (As I believe CS Lewis wrote, "true", not "real".)"

Aside from the unformatted text version you will find at the link above, "Leaf by Niggle" reprints can be found in a variety of anthos plus the original printing in the 1945 Dublin Review.

No more pictures, but here's a tiny bit about Tolkien's recordings of his work. I bought these back in the day, when vinyl records and cassette tapes were hi-tech. I've never checked to see if any of them have been re-released.

Caedmon recordings
1967 Poems and Songs of Middle-earth, Caedmon TC 1231
1967 The Road Goes Ever On, with Donald Swann (music book companion to the 1967 Caedmon recording)
1975 J. R. R. Tolkien Reads and Sings his The Hobbit & The Lord of the Rings, Caedmon TC 1477, TC 1478 (based on an August, 1952 recording by George Sayer. (There's a review here, about halfway down the page.)
The last is a special treat. According to what I heard when I ordered this from Caedmon, Tolkien was reputedly discouraged while writing "The Lord of the Rings", so George Sayer set him up with a (reel-to-reel) tape recorder one day and suggested he read passages aloud. It worked! Or something else did.

Here's something pretending to be a bibliography
“J. R. R. Tolkien”
http://en.wikipedia.org/wiki/J._R._R._Tolkien

“A Chronological Bibliography of the Writings of J.R.R. Tolkien compiled by Åke Bertenstam”
http://www.forodrim.org/arda/tbchron.html

OUT-OF-PRINT U.S. Editions of The Lord of the Rings
http://mysite.verizon.net/aznirb/mtr/oop-lotr.html

Many thanks to the owners of these sites listed above, and also to the owners of the sites to which I have provided links.
(I also spent hours looking through the early Tolkien listings at both the US and UK Amazon site.
Mostly that was for the fun of it.)
Tags: ace "pirated edition", ballantine "authorized edition", barbara remington, caedmon, george allen unwin, george sayer, houghton mifflin, j r r tolkien, jack gaughan, leaf by niggle, pauline baynes, the hobbit, the lord of the rings, the tolkien reader
Subscribe